Churches are the oldest town buildings, that with their beautiful granite facades and valuable interiors make Tempio “The Stone City”. 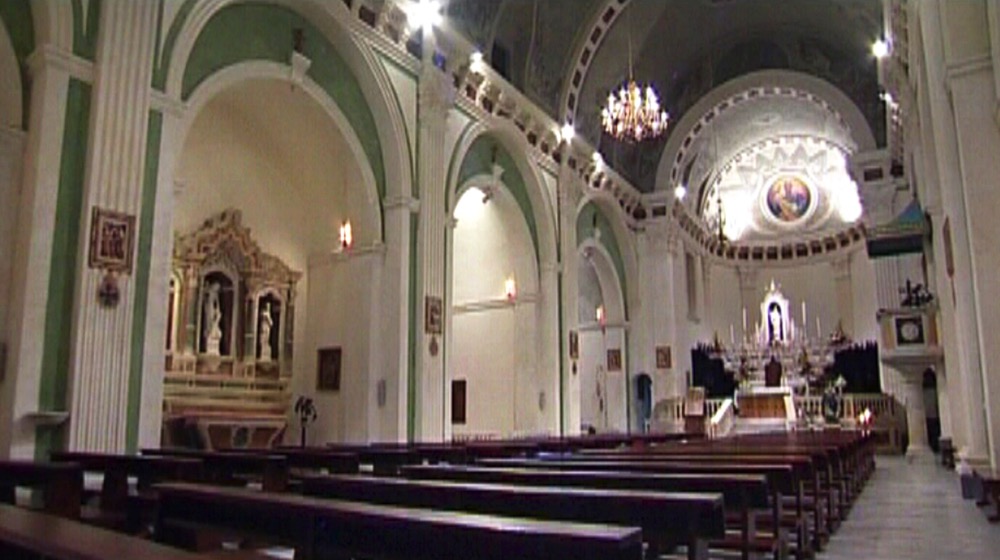 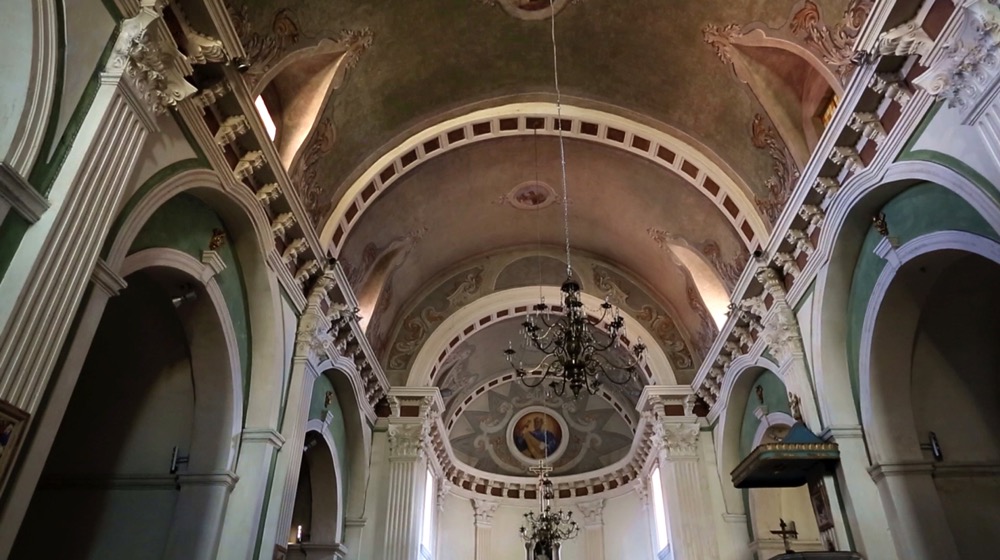 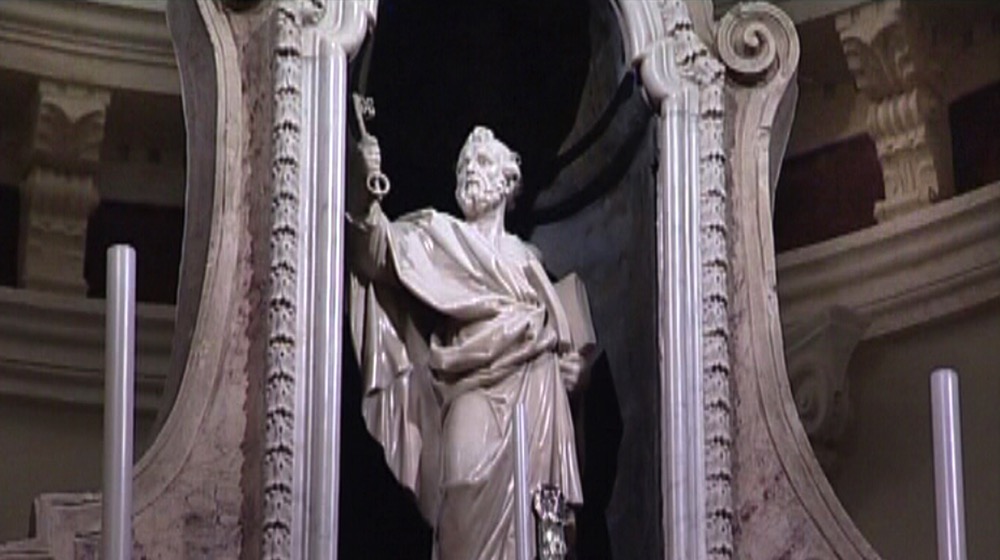 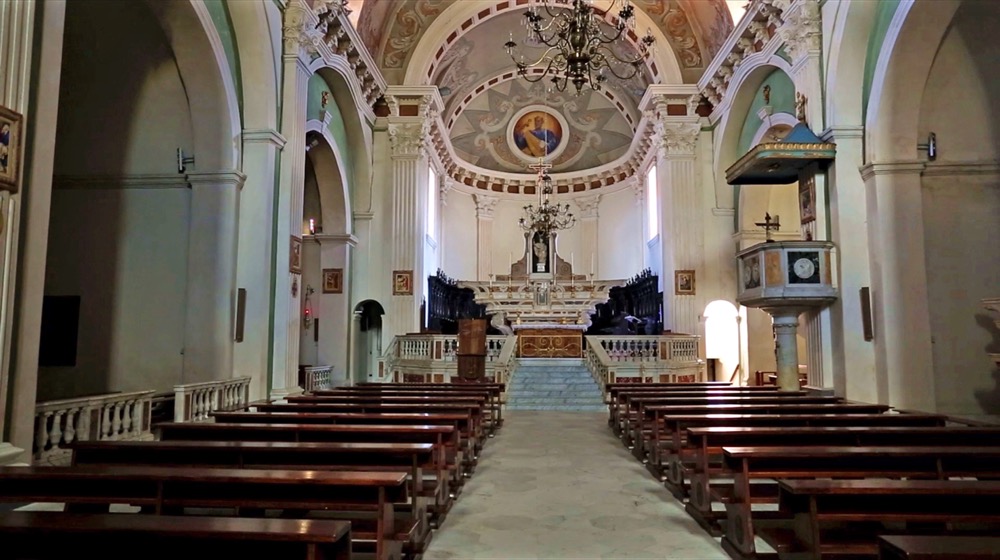 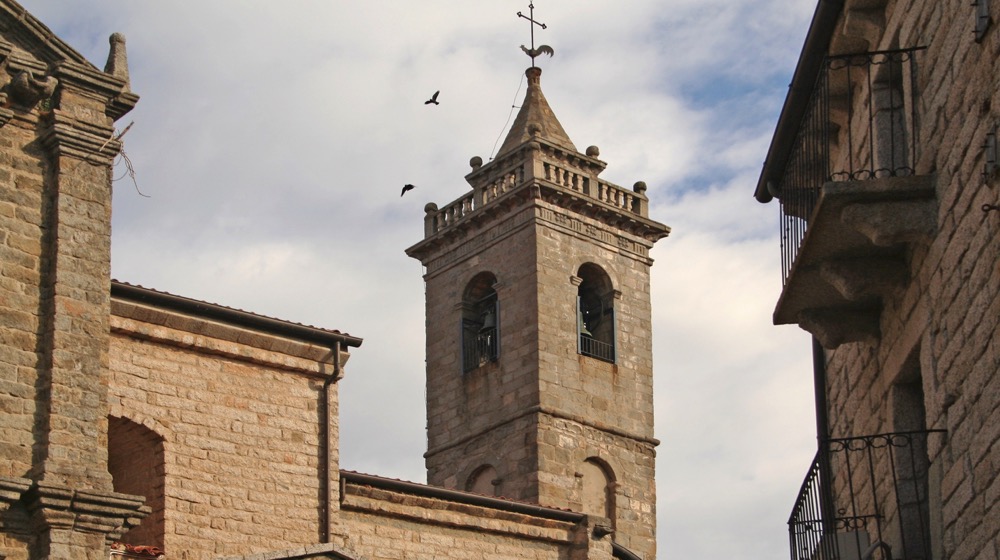 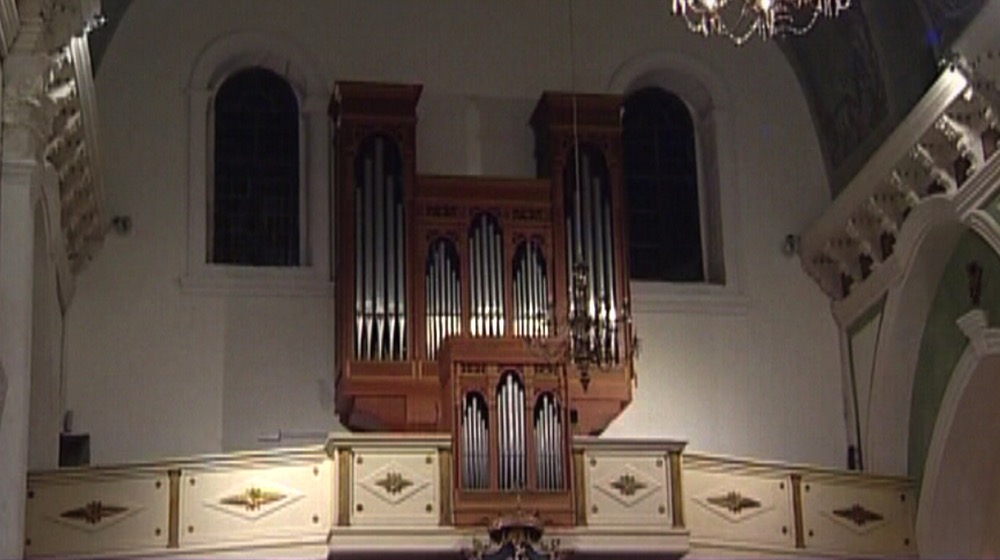 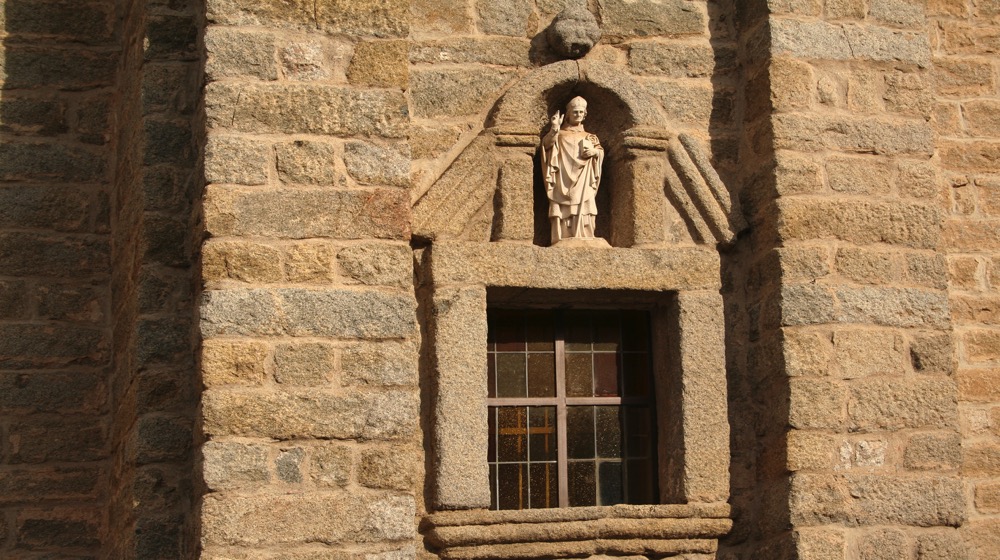 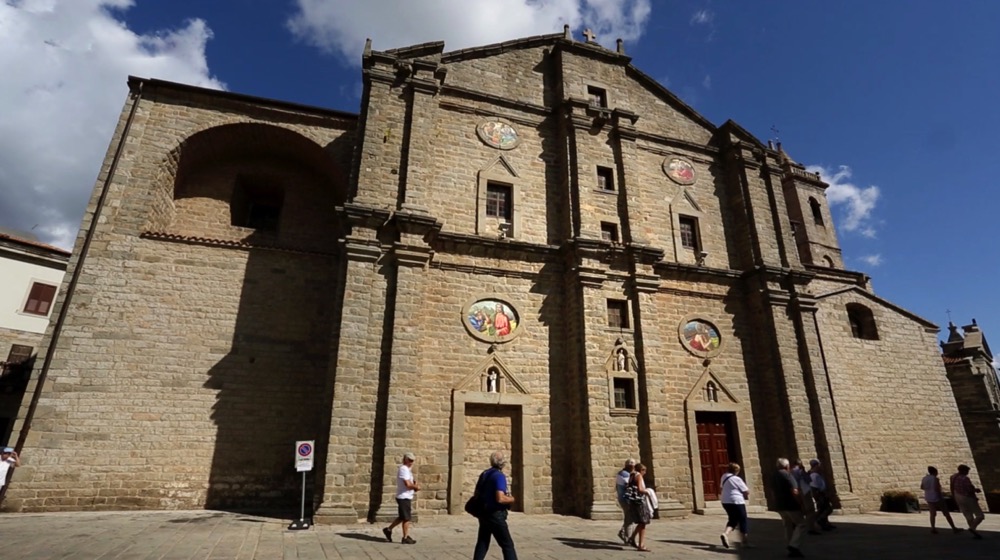 In the heart of Tempio’s historic centre stands the most important sacred building of the town, made with granite stone: the Cattedrale di San Pietro Apostolo.
To reach Piazza San Pietro, from Piazza Faber, up the alley Via Battisti and take the wide granite staircase to the San Pietro square, skirting the perimeter of the cathedral until you get the big front door.

The church dates back to about 1200, in medieval times, although in reality it has been subject to numerous works in the later periods, additions and renovations, including raising the bell in the sixteenth century. On completion of the expansion work in 1827, Monsignor Capece did inaugurate and consecrate the cathedral on June 2, 1839. Inside is imposing height, is characterized by a single nave with four chapels on each side topped by a barrel vault.

Best details are the beautiful wooden organ built by Paul Ciresa in 1980 and the marble baptismal font on the left side of the entrance. Behind the main altar stands the impressive choir carved in olive wood built during the bishopric of Monsignor Vincenzo Vico between 1737 and 1741 surmounted by the fresco circular apse of St. Peter the Apostle, who holds in his hands the keys of the kingdom of Heaven.

The Cattedrale di San Pietro was in the years benefiting from the donations of many famous people, including also a descendant of the famous family Misorro, Don Misorro built also the Church of the souls in Purgatory. 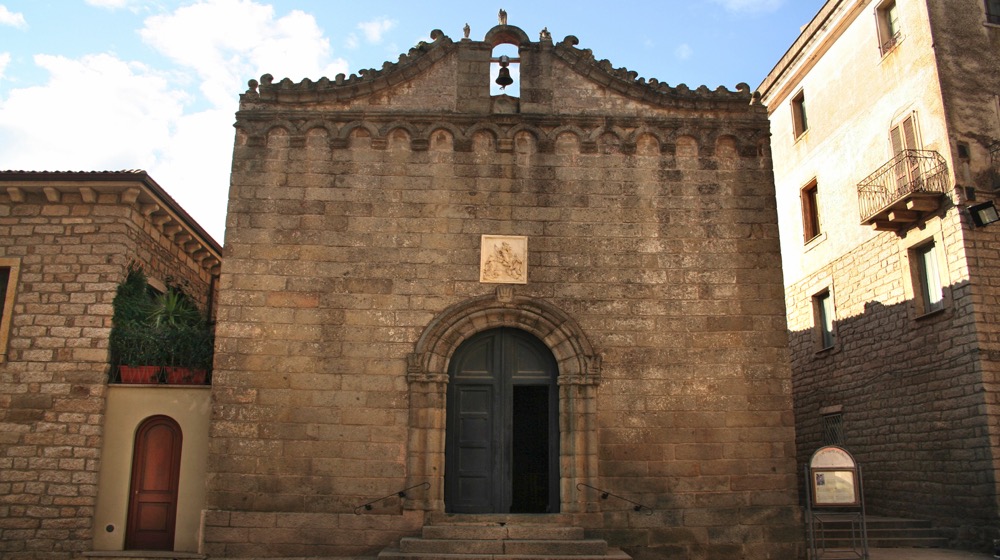 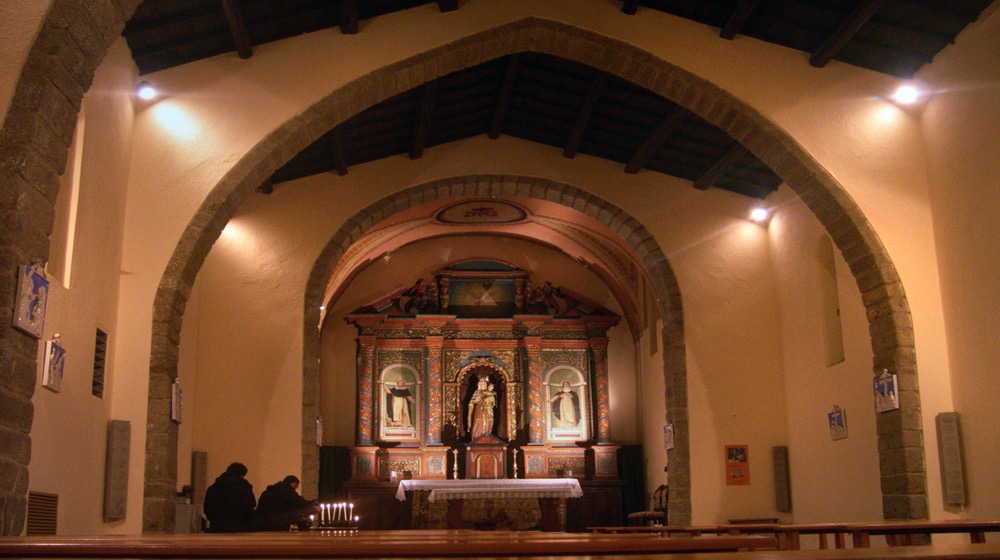 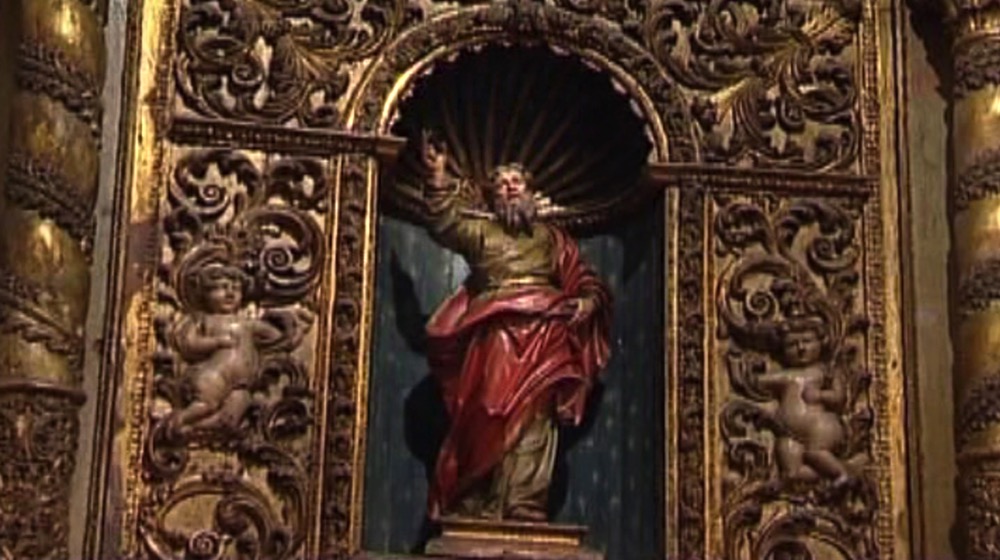 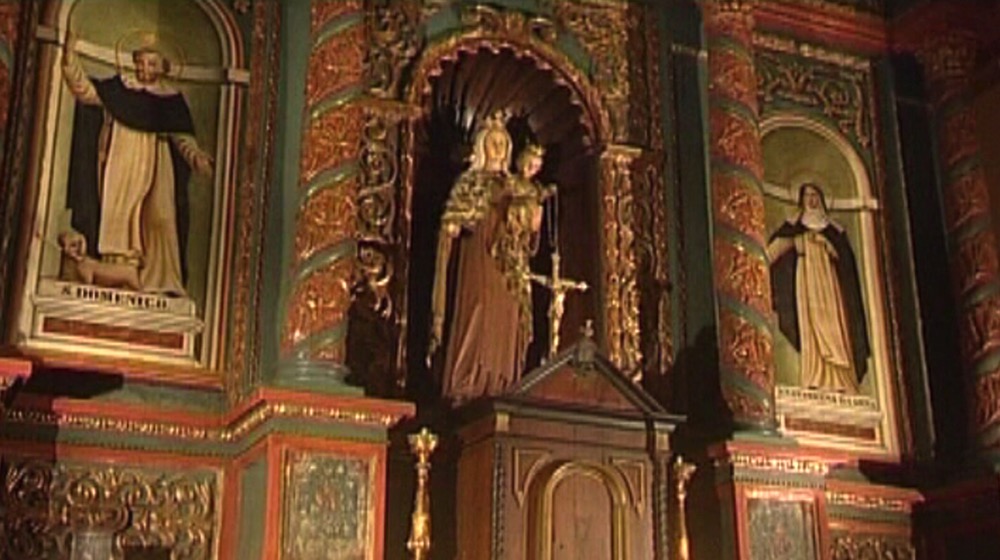 In Piazza San Pietro, in front of the main facade of the Cattedrale di San Pietro, is the small church of the Oratory of Rosario. According to an article published in the Diocesan Bulletin “GALLURA AND ANGLONA” of 1927, the Oratorio del Rosario would be built on the place where once there was a pagan temple dedicated to Castore and Polluce, the twin sons of Zeus and Leda and protectors of the legendary Roman garrisons in the area of Tempio.

The article also suggests that the ancient name of the city “Gemellae” is connected to the twins, who were called “Gemini”, and that was later changed to Tempio in reference to the Roman Temple. This hypothesis is supported by the fact that above the main facade can still see the statues of Castore and Polluce. The date of construction of the Oratorio del Rosario it is uncertain and there is no accurate historical information, but it is assumed that this building dates back to around 1300, a time when Tempio was dominated by Pisani.

Simple and hut facade, a mixture of various styles: presents several elements Pisan-Romanesque, few Gothic- Aragonese and Late Baroque. On top, an arch supports a small belfry, topped by three statues: on the left a statue of St. Joseph dating from the ‘900, the centre and right hand, Castor and Pollux. At the centre of the facade a tile marble depicting the Virgin of the Rosary with San Domenico and Santa Caterina on the bottom.

Inside the building has a hall structure and is divided into four bays by large ogival pointed arches in lancet, covered roof of sloping beams made ​​of juniper wood and chestnut. Here you can admire the precious wooden altar and the altarpiece of 1700 and the small marble font dated 1642. In 1981 the church was closed to the public because of some restoration work but already in 1982 it was reopened for worship. In ancient times, the church housed the namesake confraternity. 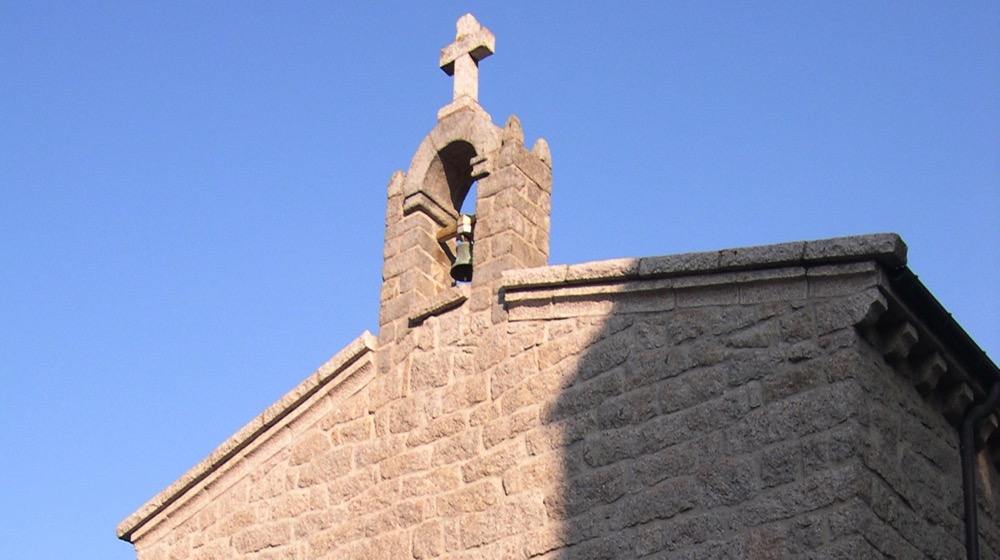 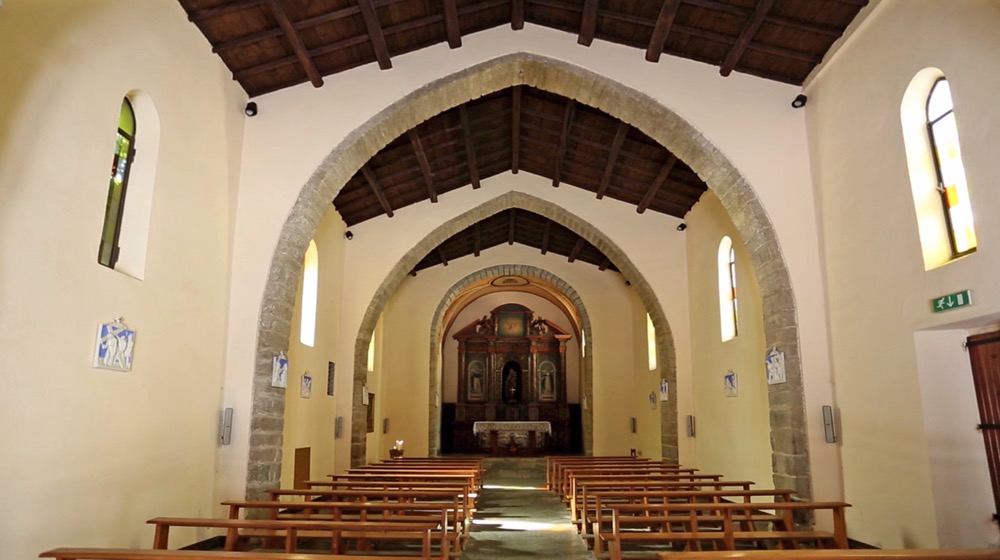 In Tempio you can visit and admire several monuments of art, wrapped in ancient and suggestive stories that characterize the cultural distinctiveness of the city, one of them is the Chiesa del Purgatorio.

The building is easily accessible, starting from Piazza Gallura cross to the narrow Via Garibaldi to reach the pretty hidden Piazzetta del Purgatorio. We are facing the Oratorio del Purgatorio formerly known as “The souls in Purgatory”, it is a small temple built in the eighteenth century in local granite stone, covered with plaster. The hut and simple facade, recall the rural churches.

Inside it consists of a nave and a high arch support a small belfry. An element certainly noteworthy is the large painting placed behind the altar dedicated to Maria interceding for souls and by which, the popular practice still in use today, to go to church to pray for the purification of the souls of the dead after the funeral.

The troubled history of the church

The church is linked to a sad act of violence, took place in Tempio back in 1670; during the reign of the Habsburgs in Gallura, strong pastoral clans occupying extended lands. At that time the criminals ruled the roost, the city was torn by hostilities that resulted in murders and nobles took advantage of their immunity.

Among the most powerful of that time there was Gavino Misorro, arrogant bloodthirsty feared in the whole surrounding area. He possessed vast territories, numerous cows and gathered around him an entourage of men ready to obey his every order. Often, with bands led by arrogant nobles like himself, they stood hostilities that led to real clashes; it was during one of these that one night, Misorro and his followers, fought on the suburb of Tempio, exactly in the place where now stands the church of the souls in Purgatory. The outcome of the battle was bloody, half the band was slaughtered with the exception of a man who was taken prisoner and led into the palace of Don Misorro, was imprisoned in a basement awaiting trial.

The next morning the residents of Tempio, aware of the massacre, shut themselves in their homes while Don Gavino Misorro went to the place of the massacre and further magistrate was vented on the lifeless bodies of enemies with inhuman brutality. A few days later he received from an old friend some advice about the treatment to be given to the prisoner, who said to him “the enemy will kill you.” Immediately the gentleman walked into the house and put the gun on the prisoner then throwing the dead body on the road.

After a short time, began to suffer from guilt but was primarily the fear of divine judgment to terrorize him and so, probably following the wise counsel of a man of God, he dismissed his retinue and went a pilgrimage to Rome to ask forgiveness for the terrible deeds. From this trip he came back transformed and prepared to remedy all the old wrongs, but he wanted to leave to posterity a sign of his repentance, so he built at his own expense in the place of the massacre a church dedicated to the souls in purgatory in honour of those killed. 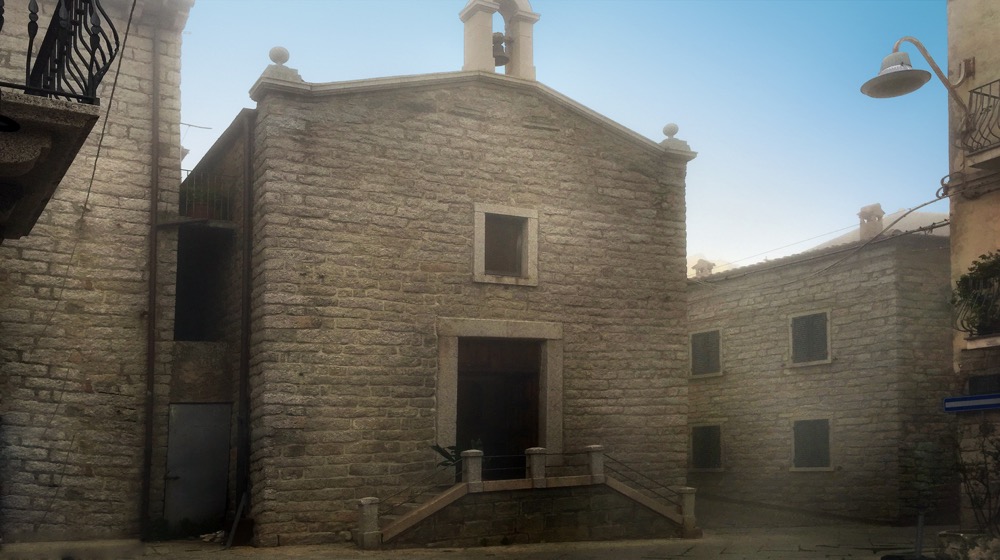 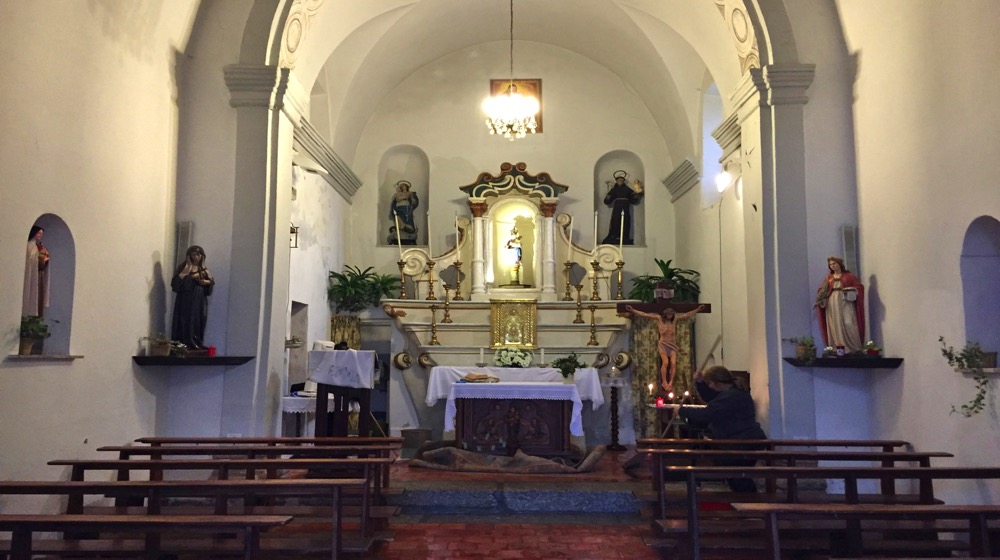 The Church of Nostra Signora del Pilar is located in the quaint old town of Tempio in Piazza Serra Sirigo. It is easily reachable from Piazza Gallura and along the entire Via Nino di Gallura, otherwise from Piazza Faber along Via Altea, below the current Ufficio Turistico. The facade of the church is situated directly on the square and the entrance is accessed through a small staircase double entry.

The Church suffers significantly influence of Spanish domination, this is also reflected by the leading name as Nostra Signora del Pilar, is the title that identifies Mary the mother of Jesus in Zaragoza, site of the miracle performed by the Virgin.

The period of construction would be placed between 1641, when he performed the miracle, and the 1724, the year written on the facade, even if in an act dated 1684, the Church of Nostra Signora del Pilar is already documented. Inside the church it has a single nave leading to the main altar, built more recently, dating from the late eighteenth and early nineteenth century. 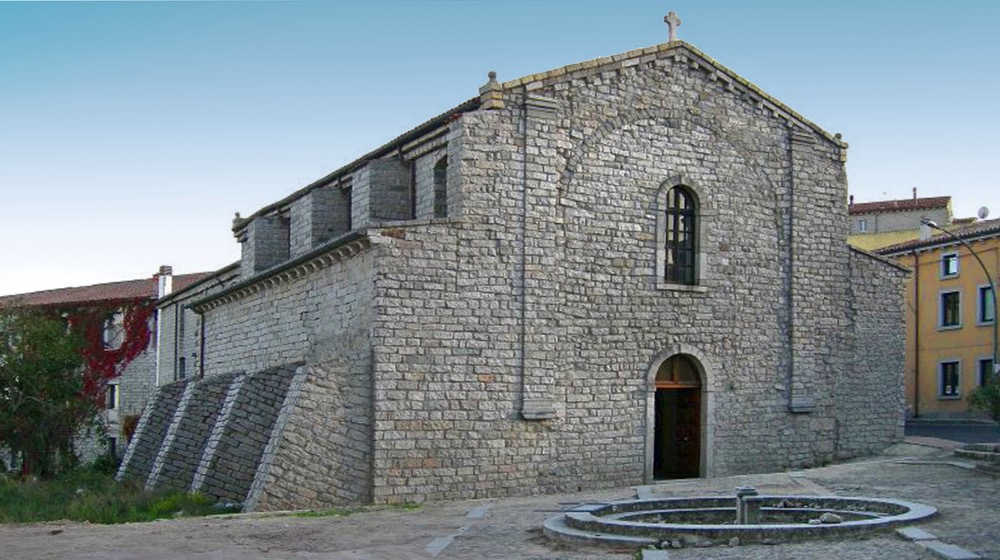 San Francesco Church and the adjoining Minor Friars convent, were built between 1543 and 1548 at the expense of the city of Tempio and Donna Giovanna de Portugal, a local feudal lord wife. The complex represents the oldest evidence of renaissance in Sardinia.
Inside, the church has a nave plan covered by a barrel-vaulted and divided into four bays by under arches; on both sides there are a total of eight chapels (four on each side), also covered by a barrel vault, separated by large Doric pilasters delimiting the bays and supporting a pediment that frames the upper arches. Large windows have been created in the vault curvature in each bay. The presbytery, very deep, is made ​​by a presbytery square area and a large rectangular choir, both barrel vaults and separated by pilasters.
The facade has two main sides at the chapels and is closed by a gable end frame to indents, and in the middle of it, the main entrance.
The building was once the nobles burial place.
On the right side of the church you can still see the old convent of Friars Minor. After the suppression of religious orders, the building was transformed first in jail, then in 1897 in hospital, and during the Second World War became instead, depot and military hospital, destroying the beautiful wooden altar and the other altars.
In more recent times instead it hosted a school.
The church has undergone an operation of restoration lasted many years, during which, it was always closed to the public, but has recently been re-opened and it houses the Museum of the Nativity. 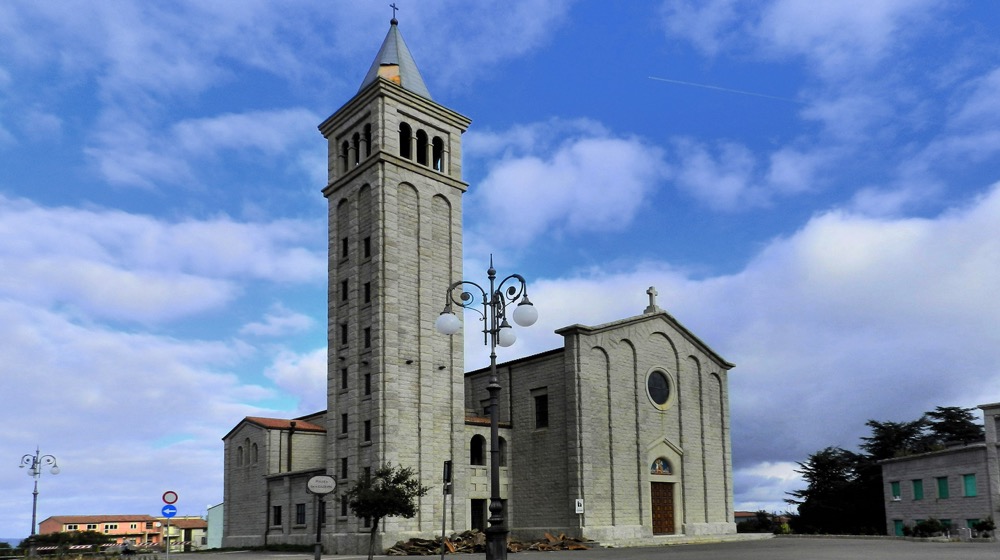 From the city centre you can reach the Church of San Giuseppe, along the bypass called San Francesco, in the first section closest to the Old Town, then San Sebastiano an intermediate route and San Giuseppe, the last access portion of the namesake district. At this point you reach the traffic light and a big intersection, turn right, go along the uphill that leads directly to the large square where the church topped by a majestic bell tower.

The building was built right on top of a hill on which once were executed death sentences by hanging; it is a fairly recent construction than the other sacred buildings of the city, in fact the work started in 1947 by will of Monsignor Morera and ended in 1999 with the construction of the bell tower, 37 meters in height. On the same square there are also the convent of the Friars Minor and the primary school.
The church, built of granite stone beams decorated with arches in relief, is made ​​according to the neo-Romanesque gabled structure; the interior is essential, with a single nave with a Latin cross and remained so even after the restructuring of the early eighties. The city municipality, gave to the pastor the land for the building, in 1935, the work began ten years later, in 1947, and although the church was not yet concluded, the bishop established the parish in 1953, that has been entrusted to the care of Friars Minor conventual.